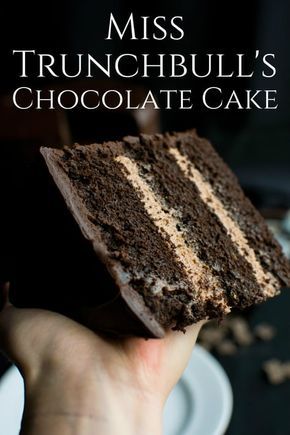 Make the Cake
Preheat the oven to 350F degrees. Line three 8-inch round cake pans** with parchment paper and grease with butter or nonstick cooking spray; set aside.
In a medium bowl, stir together the boiling water, espresso powder, and semi-sweet chocolate until chocolate has dissolved and mixture is smooth. Set aside to cool.
In a large mixing bowl, whisk together the flour, cocoa powder, sugar, baking soda, baking powder, and salt until combined.
In another bowl, whisk together the eggs, buttermilk, vegetable oil, and vanilla. Pour wet ingredients into the dry ingredients and stir until smooth. Add the cooled espresso-chocolate mixture, stirring until just combined.
Divide batter evenly among the three pans and bake in the oven for 31-33 minutes, or until a toothpick inserted in the center of the cake comes out with few crumbs attached. Remove from the oven and allow to cool completely.
Make the Ganache
Place the chocolate in a medium bowl. Pour the heavy cream in a large glass measuring cup and heat in the microwave until it starts to boil. Remove, pour over the chocolate, cover with plastic wrap, and let sit for 5 minutes. Stir ganache until smooth.
Allow ganache to cool to desired thickness before frosting the cake. You can also refrigerate the ganache, stirring occasionally until it’s thick enough.
Make the Milk Chocolate Buttercream
Place the milk chocolate in a small microwave-safe bowl and heat in the microwave until smooth and melted, about 1 minute. Stir, and allow to cool to almost room temperature.
In a stand mixer fitted with the paddle attachment, beat the butter on medium speed until creamy. Add powdered sugar, vanilla, and salt, and continue beating, scraping down the sides of the bowl as necessary. Add the cooled chocolate and beat on high for about 2 minutes, until the frosting is smooth and fluffy.
To Assemble
Place one cake layer on a cake stand or plate. Pour half of the milk chocolate buttercream on top and spread evenly with a knife or offset spatula. Add the second cake layer, and spread the remaining milk chocolate buttercream evenly over that layer. Top with the third cake layer. Frost the top and sides with the chocolate ganache.

*Buttermilk can be substituted by adding 1 1/2 Tablespoons of vinegar or lemon juice to a glass measuring cup, and then pouring in enough milk to the 1 1/2 cup measuring line.
**For tips on making this cake in two 9-inch pans, see update above.